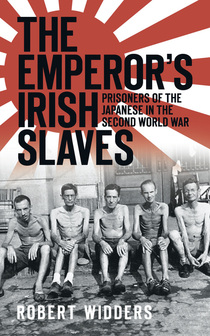 The story of the 650 Irish soldiers imprisoned in the Japanese slave labour camps during World War Two.

Over 650 Irish citizens, serving with the British armed forces, were captured when the Imperial Japanese Army attacked Singapore and Hong Kong.  They suffered torture, starvation, disease, and imprisonment in bestial conditions, whilst being used as slave labour by the Japanese.  Many died of starvation and ill treatment whilst building the Burma Railway.  Others died of heatstroke and dehydration whilst being transported to Japan.  Some were beaten to death or bayoneted.

The survivors were released and brought home at the end of WW2.  But most suffered from the effects of tropical diseases and post-traumatic stress for the rest of their lives.  As one man put it, 'we never really left the camps'.

"The role of Irishmen and women in the fight against fascism and the imperial march of the Japanese has never been widely acknowledged in Ireland.  This fine book helps put their stories on record. ... This is a grim book, but an important one."
Irish Independent

"Widders has researched, investigated and written a book that is both painful and thoughtful, a story that was either forgotten, or ignored, but one that he has brought back and we should be aware of."
Irish Diplomatic History