Spitting On A Soldier's Grave 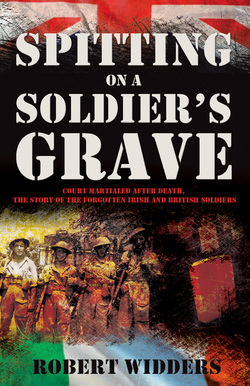 The story of the Irishmen who deserted from the Irish Army, and joined the Allies in the struggle against fascism and Nazism during the Second World War, has been kept secret for over half a century. These men fought in some of the bloodiest battles of the war. And after the war they were all subjected to a Kangaroo  Court-Martial, and condemned without representation or right of reply.

But hundreds of these men had died long before they were court-martialled.  Joseph Mullally died on D-Day, 6 June 1944, fighting with the British Army on the beaches of Normandy--a year before.  And Stephen McManus had already suffered torture and starvation whilst being worked to death in a Japanese prisoner
of war camp.

And it wasn’t just the soldiers who suffered.  In some cases their children were taken from them, condemned in court, and sentenced to a childhood of sickening abuse in the Industrial Schools.

But throughout the book the courage and decency of the individual shines through.  Gerry O’Neill risked his life with the newly formed Irish Navy, rescuing wounded British soldiers from the beaches of Dunkirk.  And Nicholas McNamara volunteered to serve with RAF Bomber Command knowing it meant almost certain death.  This book tells their story.

"An amazing story of heroism and betrayal."
Irish Post

"an incredible tale ... the way they [the Irish government] treated the Irish soldiers is absolutely appalling"
Tom Dunne, Presenter, Newstalk 106

"a book to shock and one which tackles an issue some would prefer to go away ... well researched and a fascinating read"
South Wales Argus

"Easy to read but difficult to put down."
Soldier Magazine